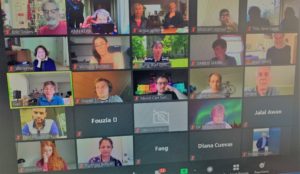 Nicholas Goldberg, an associate editor and Op-Ed columnist for the Los Angeles Times, spoke with around 50 Fulbright scholars and alumni from all over the globe including China, Australia, New Zealand, Germany, Pakistan as well as from across the United States. Fulbright coordinator and UCLA international relations professor Ann Kerr, along with Jalal Awan (VP, Greater LA Chapter) hosted the discussion over Zoom, the first ‘virtual seminar’ in a series of Fulbright sessions that Nick has had with Fulbright scholars over the past few years. Nick previously served 11 years as editor of the editorial page and was also a former editor of the Op-Ed page and the Sunday Opinion section. While at New York Newsday in the 1980s and 1990s, Goldberg was a Middle East correspondent and political reporter.

In addition to answering the students’ and attendees’ questions on his career as a prominent journalist, Nick also highlighted some of the recent challenges that America faces including systemic racism, unequal access to opportunities, misinformation and the recent crises of a global pandemic and protests around police brutality across America. He emphasized First Amendment rights of freedom of speech, fact-checking news, highlighting injustice through activism, writing and mobilizing through community participation as well as peaceful demonstrations against tyranny and unconstitutional measures. Nick ended his talk on a positive note by highlighting the fact that the country, through sheer unity of purpose and the power of human spirit, has faced similar challenges before and generally made progress as an evolved democracy.